Oil prices continued to strengthen after last Wednesday's slump. Strong Fed rate hike expectations and weak Chinese trade statistics have exacerbated concerns about a slowdown in the world economy and the destruction of energy demand. Official data from China showed that China's exports in August were year-on-year. The growth was only 7.1%, which was lower than the psychological expectation of 12.8%. In August, China's imports increased slightly by 0.3%, which was lower than the psychological expectation of 1.1%. Where will oil prices go next? We interviewed the UTC trading desk team in writing.

In the short term, what are the main factors affecting the crude oil market price?

At present, the main supply and demand factors that affect crude oil market price expectations are:

Demand: The Chinese government is facing a severe epidemic prevention situation and implements strict epidemic control policies. Chinese refineries are constantly suppressing the operating rate, which to a certain extent suppresses the traditional autumn crude oil purchase demand, and China is the world's largest crude oil supplier. The number one buyer, China's crude oil imports in August 2022 were only 9.54 million bpd, compared with 10.53 million bpd in August 2021 and 11.23 million bpd in August 2020 , superimposed on weak trade data, the market believes that China's implied demand for crude oil in the rest of 2022 is weaker than expected.

Supply: Due to the successful implementation of a combination of policies such as the release of strategic reserves, the relaxation of gasoline RVP standards in summer, and the temporary measures of gasoline consumption tax, the market's worries about the shortage of gasoline in summer in Europe and the United States have disappeared, but these sentiments have shifted to distillate oil in winter. , The news media of various countries are constantly exaggerating that the world may face another energy crisis this winter. Looking at the U.S. futures market, the U.S. RBOB gasoline futures have erased all year-to-date gains, while the U.S. heating oil futures price, which represents distillate oil, remains unchanged. at highs since January;

Judging from the level of U.S. refined oil inventories, U.S. gasoline inventories have fallen to a reasonable level after the end of the summer. According to historical laws, if there is no accident (U.S. refiners will no longer increase gasoline exports), the U.S. gasoline inventory level will increase next. Returning to the seasonal growth model, the level of distillate oil stocks in the United States continues to decline. Whether the distillate oil can complete the accumulation of stocks before the arrival of the cold winter is the focus issue that professional investors are closely judging and judging. From the HO VS BRENT cracking in 2023 The trend of the spread and the RBOB VS Brent crack spread continues to show a scissors difference, and investors believe that there is still room for distillate prices to rise.

In the medium term, what are the main factors affecting the crude oil market price?

In Asia, according to satellite image data from relevant agencies, China's onshore crude oil inventory level is about 900 million barrels. After a brief rise in April, it has been in a continuous downward trend and is currently lower than 2021 and 2020. The historical level of the same period last year, but still higher than the historical level of the same period in 2018 and 2019. Statistics from India show that India's oil demand in August increased by 16.3% year-on-year to 17.81 million tons. To a certain extent, the epidemic control policy has led to a decline in the number of crude oil imports, but China's crude oil inventories continue to decline, indicating that China's oil consumption demand remains within a reasonable range, while India's demand data has continued to grow strongly in recent months. The performance, to a certain extent, offset the decline in Asian demand brought about by China's epidemic policy.

We can reasonably expect that when China's crude oil inventories drop to a certain level and the epidemic situation is effectively controlled at a certain point, China's crude oil purchasers will quickly return to the market, superimposed on the normalization of crude oil demand in other emerging economies. World crude oil consumption is expected to be completely back on track by then. 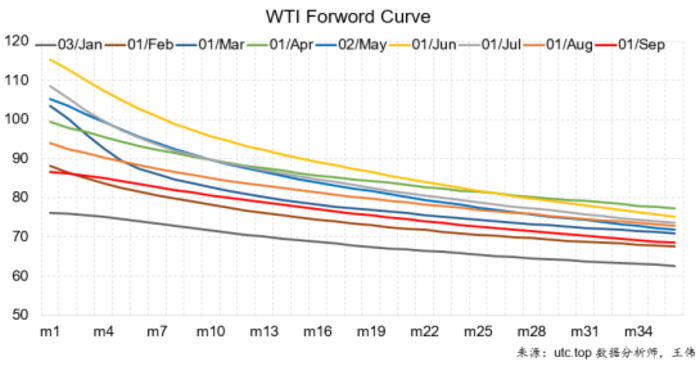 What are the main factors affecting the price of crude oil in the long run?

Human beings are going through traditional energy crisis and new energy technology revolution. Judging from the recent publicity by mainstream news media around the world, governments around the world are effectively influencing and controlling human energy consumption expectations. People are constantly deepening their understanding of the energy crisis and making efforts to change themselves. This leads to a complex situation: the energy supply side is afraid to respond effectively to higher crude oil prices vs the gradual normalization of the energy demand side, which leads to seasonal shortages, that is, despite the short-term and long-term The crude oil curve has all recovered to the higher price range, but crude oil producers have maintained a rather cautious restraint in expanding long-term investment and increasing crude oil production supply.

Therefore, in the long run, crude oil will continue to face the risk of tight supply in the coming period, but as the impact of the epidemic gradually subsides, human economic activities gradually return to normal, the global population returns to the growth track, the summer energy crisis and winter The story of the energy crisis will be repeated in the news media of various countries, superimposed on emergencies such as "disastrous weather, geopolitical conflicts", and the long-term crude oil volatility is expected to continue to strengthen until the success of the new energy technology revolution of mankind, which completely resolves the traditional energy crisis.