In the past 2022, the crude oil market showed a sharp rise and a fall. In the face of intricate international relations and economic events, it started a big bullish rise at the beginning of the year, and then fell back to find the bottom. It is currently in the process of bottoming out.

A war broke out between Russia and Ukraine over territorial issues.

Gold rose sharply: due to the sharp rise in crude oil prices and the record highs of inflation, gold has become an important hedging tool.

Inflation is rising: Ukraine is the breadbasket of Europe, and its corn and wheat exports account for more than 10% of the world. The war situation has caused the export of Ukrainian agricultural products to decrease, the price has soared, and the price of valuable energy has also risen, which eventually caused the inflation level of many European countries to hit new highs.

Crude oil rose sharply: due to concerns that Russia will cut off energy supplies to Europe, the prices of energy sources such as natural gas and oil rose sharply after the outbreak of the war. The impact of high energy prices has since spread to other areas of the economy, pushing up transportation costs and food prices, which eventually led to higher inflation in many countries around the world.

In order to curb the high level of inflation in the country, the Federal Reserve opened the channel to raise interest rates.

Crude oil plummeted: interest rate hikes led to the scarcity of US dollars in the market, and the price of US dollars rose. The investment market sold crude oil and switched to US dollars, causing crude oil prices to continue to fall.

Analysis of crude oil investment after the Spring Festival in 2023

From the perspective of short-term investment preferences, the Russo-Ukrainian War is undoubtedly one of the most concerned events in the world. As the saying goes, gold is invested in prosperous times, and oil is hoarded in troubled times. The frequent occurrence of incidents and the conflict between Russia and Ukraine will inevitably make investors worry that the currency in their hands will not be able to preserve value. Therefore, as a hard investment product, the strategic value of crude oil is much higher than that of currency.

From the perspective of the medium-term supply and demand relationship, except for Europe, the current reserves of crude oil in other countries are slowly declining. This is due to the shutdown of the manufacturing industry, the decline in the number of starts, and the decline in global commodity demand after the impact of the epidemic. Therefore, in the medium term, the supply of crude oil exceeds demand, and the price will fall further.

From the perspective of long-term investment value, since the outbreak of the epidemic in 2019, global import and export trade has been hit hard. Coupled with the trade protectionism pursued by various countries, the prices of all products, including energy trade, have plummeted. Larger shocks, coupled with geopolitical conflicts, have torn the Eurasian plate apart. Crude oil, as a vital strategic material and energy security material, cannot be transported to Europe, causing an energy crisis to break out in Europe. Once the epidemic weakens, In order to restore the economy and production, countries will experience a blowout increase in the demand for crude oil. Therefore, in the long run, the demand for crude oil will exceed the supply, and the price will not only reach the previous high, but even hit a new high. 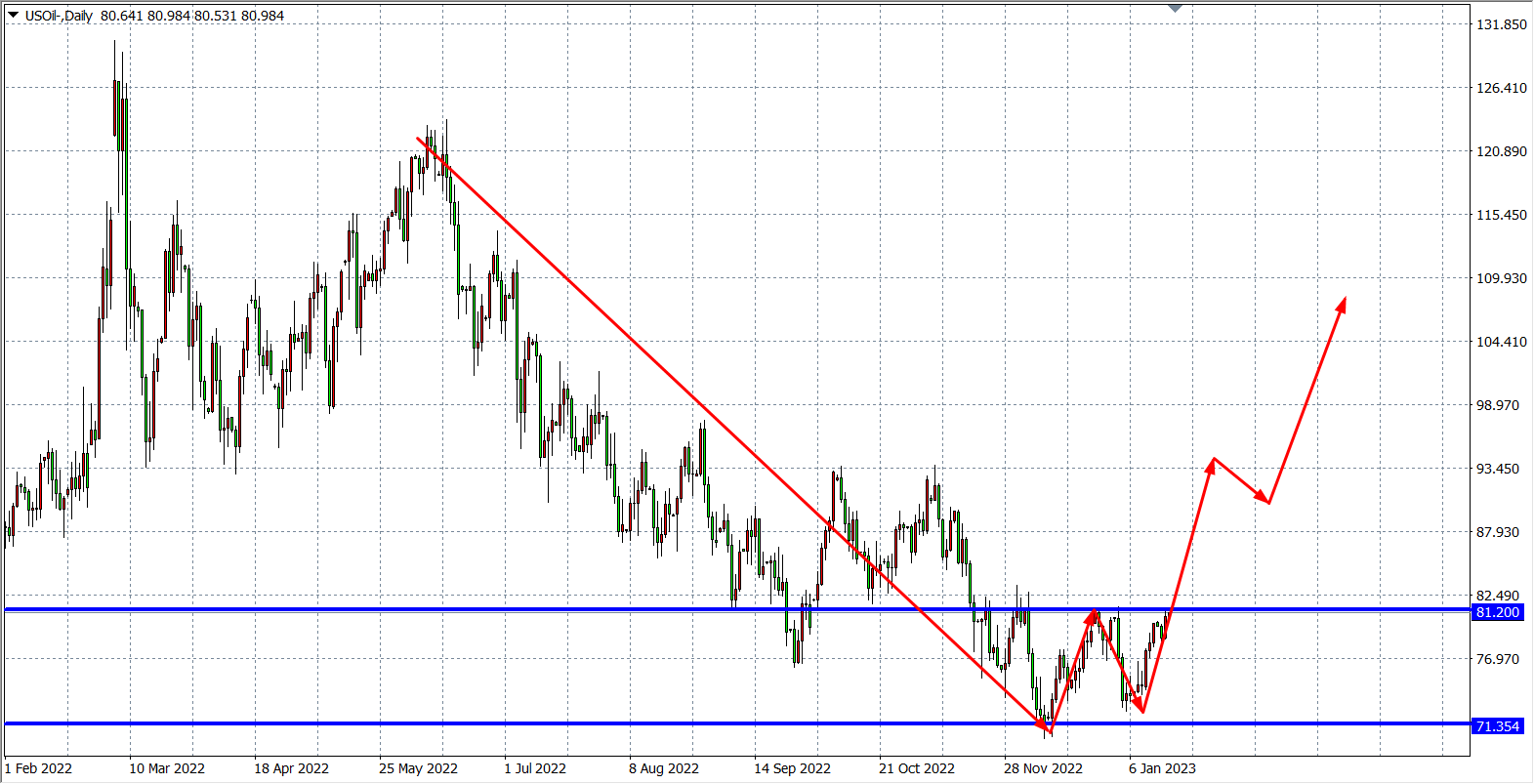 From a technical point of view, this wave of WTI crude oil fell to 71 US dollars and the market bottomed out obviously. The form is expected to form a double-bottom structure, with the neckline at 81.20 US dollars. The recent rebound from January 5 to $80 has been significantly hindered, and it may maintain its momentum for a long period of time in the new year. Once the market outlook breaks through the neckline of $81.20, the double bottom will be successfully constructed, and the mid-term target is expected to reach 93-100 dollars.