Gold welcomes the new year with a "good start"

At the beginning of the Asian market on January 3 (Tuesday), spot gold broke through $1,840 for the first time since June last year, with an intraday increase of nearly 1%, and a good start to the new year!

Under the pessimistic economic outlook in 2023 and the potential "financial risks" caused by the Fed's continued interest rate hikes, gold has undoubtedly become one of the few "high-quality assets" in the market. Afterwards, the US dollar has maintained a strong performance, with a cumulative rebound of nearly 14%.

It is worth noting that on the first trading day of 2023, gold further broke through $140 to a session high of $1841, refreshing to a new high in more than half a year since June 27, 2022, highlighting the market's strong bullishness towards gold.

Specifically, the International Monetary Fund (IMF) recently warned that a third of the world's economies will be hit by recession in 2023, and the world faces a "harder" year than the past 12 months.

The Organization for Economic Co-operation and Development (OECD) warned of a surge in potential risks to global pension funds as major central banks raise interest rates to rein in inflation. A recent survey by the Forum of Official Monetary and Financial Institutions (OMFIF) shows that nearly half of public pension funds globally with assets above $3 trillion plan to increase their exposure to alternative investments.

At present, market investors are mainly worried about whether gold can rise further due to the consideration of the Fed's monetary policy. But U.S. inflation is showing more evidence of a further fall (the U.S. PCE price index rose 5.5% year-on-year in November, slowing for the fifth consecutive month; the core PCE price index (excluding food and energy prices) rose 4.7% year-on-year in November, 5% lower than the previous value), the above data suggest that the biggest constraint on gold's upside is easing.

It is foreseeable that once the market confirms that 5% becomes the high point of the Fed's terminal interest rate, it will provide a basis for gold to achieve a greater cycle of rising prices.

Bluford Putnam, chief economist and general manager at CME Group, said that when the Fed started raising interest rates from zero, the first few hikes, in fact until September, can be imagined as taking your foot off the gas pedal while driving, but Didn't actually apply the brakes. The Fed is only now starting to raise rates into what we consider a restrictive range, i.e. starting to hit the brakes, so the economy will slow, but perhaps avoid a recession. "

In addition, the Russian Ministry of Defense reported on January 2 local time that Russian Air Force fighter planes attacked the temporary strongholds of foreign mercenaries in Donetsk and Kharkov, killing more than 70 foreign mercenaries. The Russian army also destroyed Polish-made self-propelled artillery in Kherson, and destroyed two American-made M777 howitzers in Donetsk; Dnepropetrovsk and Zaporozhye attacked Ukrainian oil depots respectively. In addition, the Russian air defense system also shot down 15 Ukrainian drones in various places. It was one of the deadliest attacks in the Ukraine war and could heighten geopolitical tensions, boosting safe-haven buying in gold. 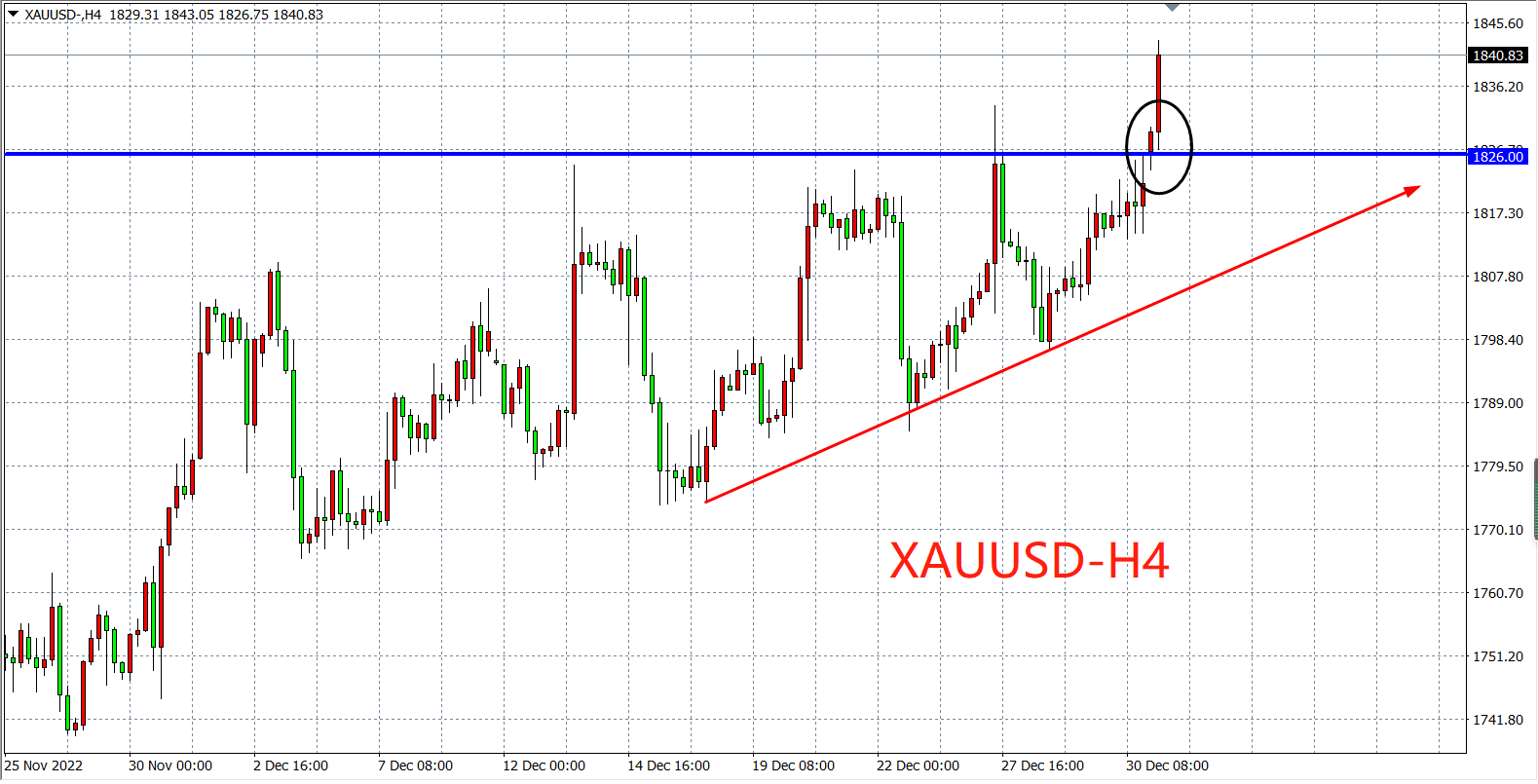 From a technical point of view, the price of gold has opened a new upward wave, breaking through the previous high pressure of 1833, and the trend has entered a bullish trend. The current support has moved up to 1826. Relying on this support in the day, it is mainly to do more on dips. The upper target is around 1850-1865.